Now just a word about wandering off with a guide book or a few pages printed off the internet to get some mushrooms. There was a lady poisoned after eating a nice meal of saffron milkcaps at her friends house because she was told something like they were the orange ones growing under the pines up the road. So she picked what she thought was the tasty ones and got this mushroom by accident. You probably know this common poisonous mushroom, the cute little fly agaric – amanita muscari and are wondering how on earth…. 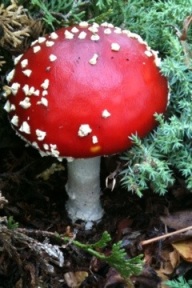 I photographed it in Ulverstone right next to its older siblings which are bleached by the sun to a nice saffron orange. To top off the disguise note the ‘spots’ which are the warty remains of the universal veil around the baby mushroom, can wash off in the rain! 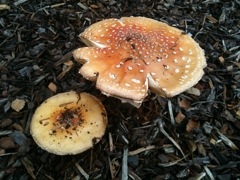 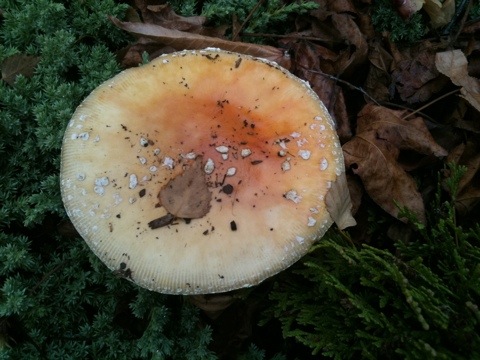 If you turn it over the gills are still white and there is no orange milk exuded when you cut the stem.

Tim, who also attended Trevor’s talk, confidently identified this specimen brought along by Rowena from her garden as a delicious edible parasol mushroom – Macrolepiota procera which has a “distinctive, double-edged ring, that slides freely up and down the stem.” But before you race out and look for a meal of these be aware they are NOT  a beginners mushroom. Tim is confident only because he has seen hundreds and lepiotas contain many poisonous species. It is easily confused with its evil doppelganger the green spored Chlorophyllum molybdites and so causes the most mushroom poisonings every year ( thankfully not fatal) as I learned at the Fungimap debate. Unfortunately even microscopic examination may not separate the two although molybdites usually has a grey or green spore cast while the parasol mushroom’s is white. “often the spores take a while to mature and may even appear to be white as in Lepiota! There was a poisoning some years back in which a famous mycologist searched the entire fruiting body that had poisoned someone and could only find *one* green spore.” Also there are white spored look-a-likes like the shaggy parasol confusingly listed as a choice edible although causing gastric upset to some people and others eat them without a problem!

This one I found growing in the leaf litter by the roadside. Now is it a parasol mushroom or one of the poisonous look-a-likes? The ring is neither double nor moveable and it is more dainty in size – so I suspect from looking up Mushrooms and toadstools of Australia ( *see caveat below ) it is the ‘mildly poisonous’ Lepiota Cristata which has a very distinct spiky spore and is known to occur in australia.

UPDATE: probably not cristata – – I’ve seen pictures and they are too small. Anyway finally found a nice parasol with some guidance when we went out hunting again at Oldina and ate it after checking the spore print (dusted in seasoned flour and fried in butter, wonderful flavour –

thanks to this book  (good field notes though not written for australia and very incomplete in terms of poisonous lookalikes, great pictures and awesome recipes Dont’ rely on it as a field guide! see more mushroom mistakes )