The main reason I have no time to organise Astrotas meetings is I am renovating an old house. It’s lovely but if he knew then what we know now do you think Gramps would have used lead paint and asbestos?

Dayne Pratsky will be available for q&a at the Tasmanian screenings of his movie on fracking in australia. For session times and venues ( burnie, devonport,hobart ) please see the what’s on page or http://frackmanthemovie.com/screenings?r=#more

Fracking suffers from being a newish process where everyone seems to be “making it up as they go along” – to quote Jolynn Minnar, director of “Unearthed” https://www.youtube.com/watch?v=IPIEzSwPwT0

Considering the mess and colateral damage oil wells, coal and gold mines, not to mention nuclear power companies manage to make with the existing technologies, I conclude a coal seam gas well disaster is merely a matter of time and Murphy’s Law.  To quote the detractors of the movie –

ie: leaks are very rare but NOT ZERO. So certain are we that Murphy’s law applies to petroleum companies, Tasmania has The Penguin Jumpers Project Over 15,000 Penguin sized little woolies stored in Oil Spill Response Kits. In the case of a major oil spill, these jumpers will be used to help rehabilitate Little penguins (Eudyptula minor) that have been oil affected.

The only real question is do we want another method of fecking up the environment to add to those we already have?

Rodger organised  to have Ken Barrett, mathematician and Reiki healer from Melbourne, give a talk while he was here on holiday. We have been waiting a longtime for this event! My mind is truly expanded – so much to take in from this lecture – much to study, more questions than answers in fact, so I’ll just quickly upload those slides as promised – its in pdf format so you can see them  without powerpoint on the internet or download to your computer. A version with my notes will be uploaded later and futher commentary here on the blog. 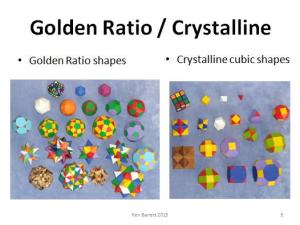 Click to view Slides from the lecture in pdf format

You may also like to litsen to 2 hours! of Dan Winter at the Melbourne Astro meeting youtube.com/watch?v=qGYkJgOS2e0

and the short TEDtalk by Garrett Lisi ( the E8 theorist mentioned by Ken ) I enjoyed it although since Wal Thornhill’s Electric Universe lecture basically shows relativity, string theory and multiverses, and particle physics is imaginary maths, I have politely filed it mentally under ‘entertainment’ rather than ‘science’ or ‘Technology’ www.ted.com/talks/garrett_lisi_on_his_theory_of_everything

Although last saturday’s sacred geometry with Ken Barrett was the final Astrotas meeting for the near future, the journey continues with this blog and Astro south australia.

“A real cosmology must be a broad and coherent natural philosophy. It may always be incomplete, based on our limitations, but to be valid there can be no exceptions in our experience. In particular, cosmology must address issues of life and the human condition. Therefore it must be a truly interdisciplinary pursuit.” – Wallace Thornhill

In October 2014 Astrotas sponsored philosopher & physicist  Wallace Thornhill  from Canberra to present the paradigm shattering  Electric Universe theory. This was a truly mind expanding talk drawing on his 5 decades of accumulated knowledge. Wallace is a modern Galileo whose work, following on from that of Ralph Juergens, is at odds with the current erroneous cosmology of the Big Bang and Einstein’s theory of Relativity. It was pretty amazing to have people flying in from Melbourne and Sydney to listen to him!

Wallace kindly helped us put together a video of his talk which serves as a fine introduction to his life’s work without overwhelming technical detail.  In preparing his talk I asked him to assume no background knowledge of electricity in the audience except an ability to put batteries in the right way round.

The good news – no global warming, we have a unified theory of everything, the universe is not full of weird behaviors and stuff can travel faster than light

The bad news – no more alternate universes or time travel for Dr Who script writers, and we have to somehow convince more mainstream scientists to walk away from imaginary complex mathematical models and their (expensive) errors eg. designing a comet lander for an icy ‘dirty snowball’ instead of a rocky chunk ejected electrostatically from a planet.

The following month he was off to Portland Oregon for a high powered EU workshop where he delivered the technical version of his stunning “Theory of Everything” in a mere 45 mins! Cosmology for the 21st Century – video below.  Further personal commentary on the EU theory are in posts in this blog (including an simple explanation of the electric theory of gravity discussed briefly by Wal ) It is time to rewrite the textbooks!

A. “Cellular Circuit: A cell can be thought of as a circuit made up of capacitors and resistors. Its membrane and those of its organelles, such as the nucleus, act like capacitors. The briny liquid encased within the membranes, the cytosol and nucleoplasm, is conductive and so can be modeled as resistors.” http://www.biotele.com/bioelectric.htm Illustration: Bryan Christie Design

Lurking deep inside an ordinary cell are electric fields strong enough to cause a bolt of lightning. “The existence of strong electric fields across cellular membranes is accepted as a basic fact of cell biology. Maintaining gradients of charged molecules and ions allows for many cellular functions, from control over cell volume to the electrical discharges of nerve and muscle cells. The fact that cells have internal electric fields, however, is surprising. Kopelman presented his results at the annual meeting of the American Society for Cell Biology. “There has been no skepticism as to the measurements,” says Kopelman. “But we don’t have an interpretation.” http://www.technologyreview.com/news/409171/lightning-bolts-within-cells/

The electric universe theory isn’t surprised that it doesn’t stop on the outside of a cell at all since the wiring runs continously through the beautiful living matrix model.

B. the Living Matrix model of the body and cell – James Oschmann

I felt quite underawed by this year’s Nobel Prize for medicine – ‘place cells‘. Part of the disapointment stems from this looking retro and pedestrian after recent findings in neuroplastic research. Important no doubt but not electrifying news, not a patch on reading Energy Medicine, The Scientific Basis James L. Oschman, 2000

Modern neurophysiology focuses primarily on the activity of less than half of the cells in the brain (Becker 1990a, 1991). The ‘neuron doctrine’ holds that all functions of the nervous system are the result of activities of the neurons. Integration of brain function is therefore regarded as arising from the massive interconnectivity of the neurons. This view is incomplete because it ignores an evolutionarily more ancient informational system residing in the perineural connective tissue cells that constitute more than half of the cells in the brain. Perineural cells encase every nerve fiber, down to their finest terminations throughout the body. The perineural system is a direct current communication system  reaching to every innervated tissue. The perineural system  establishes a ‘current of injury’ that controls injury repair. Historically, the injury potential was discovered before the discovery of resting and action potentials of nerves (Davson 1970). The current of injury is generated at the site of a wound, and continues until repair is complete. James L. Oschman

A number of biologists have concluded that the frequency overlap of Schumann resonances and biological fields is not accidental, but is the culmination of a close interplay between geomagnetic and biomagnetic fields over evolutionary time James L. Oschman

As mentioned in an earlier post I came to hear of Wallace Thornhill’s Electric Universe theory via the bio-electric side of things. I footled off to see David ‘eating for beauty’ Wolfe on a rawfood/permaculture retreat in Byron Bay. Like good hippies we were supposed to walk around Leilani’s garden barefoot, ‘earthing’. I had visions of hookworm and ant bites so was a little slow to warm to the idea ( despite a grounding hug from David! ) but in the end I came around to it. Longtime members may have seen little ads for Earthing products on the astro website – we are connected to the cosmic grid! The catalyst was hearing James Oschmann lecture on the body being a liquid crystal electric circuit.