The first slippery jacks of the year are up – but it’s been quite dry so the season may not be brilliant. No saffies (saffron milkcaps)  yet 😦 Still we had a nice picnic scouting for mushrooms for next saturday’s meeting, although it would have been better without the wasps TIP: do not bring sausages for a sizzle at this time of year . They left our mushrooms alone though! Apparently they are hunting meat for their young right now. Earlier in the year they are after fruit. Shucks – all out of step with the firebans!

The Oberon visitor’s center in NSW still publishes a guide to these mushrooms http://www.oberonaustralia.com.au/visitor-information/things-to-see-do/mushroom-picking/

and while on the subject of NSW mushroom foragers – the same day Bella and her Youth food movement crew hauled a bumper crop of saffies for the Guerilla Dinner from what is obviously a far better managed resource than the cut and burn approach of Forestry Tas (although unfortunately Belangalo State Forest is also famous for backpacker murders which really puts a damper on the whole idea of tromping about the woods doesn’t it?) http://www.youthfoodmovement.org.au/foraging-for-the-fruits-of-nsw/ 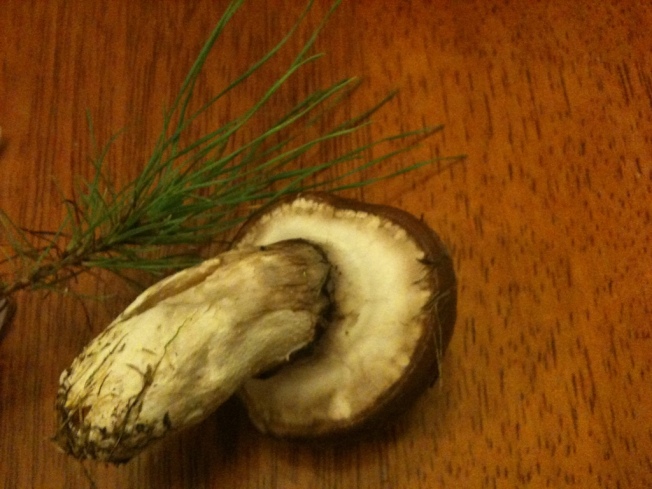 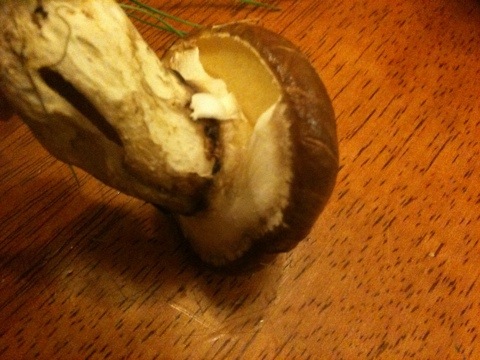 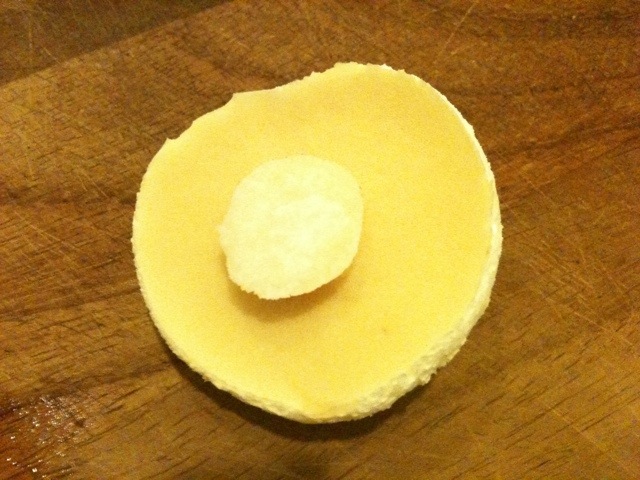 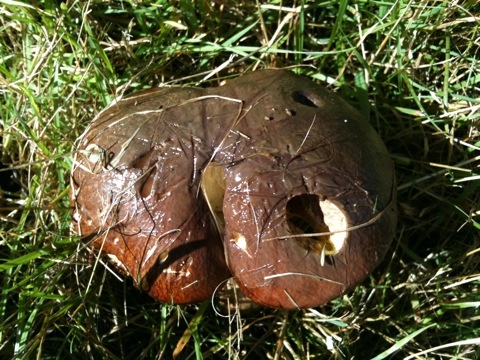 An older slippery jack in situ showing slimy cap and wormhole – inspect slippery jacks carefully for slugs etc! The pine roots it is mychorizal to penetrate the grassy area. The trees were about ten metres north and moss in the grass testify to the dampness of the area. Other mushrooms were growing in the area including another similar bolete and the poisonous fly agaric – more id notes to follow april meeting.

Fried in butter with basil and served with sourdough, chickpea sprouts and marinated goat feta, red grapes, lettuce. It has a delicate texture and flavour that goes well with lemony herbs.

Wild mushroom hunting in Europe is fanatical, spawning a top rating show in Spain and actual murders in Italy over the secret location of prized fungi.

Trevor Sneath initiated us into foraging for the slippery jack (Boletus portentosus or Suillus luteus) and the saffron milkcap (Lactarius deliciousus) – a skill passed onto him by Polish friends.

There were tastings of prepared mushrooms dishes including pickled saffies and Carolyn presented some medicinal mushroom information and samples. Tim, a new member, identified another species brought along by a visitor as the tasty parasol mushroom. (unlike the other two this is NOT a mushroom suitable for beginners )

All information is provided as is without warranty. It takes time to develop the skills to identify edible plants including mushrooms – when in doubt go without!

We had such an enthusiastic audience that despite the mizzle Trevor was eventually coerced into taking us out to the pine forest where a bumper crop of saffron milkcaps awaited. The slippery jacks found were somewhat past their prime but it was good to get a look at them in the wild. More notes

Please be aware that you will undertake this outing at your own risk. This is a pine forest and we will be off the beaten track – wildlife is present (jackjumpers, snakes).

Useful links:
Learn to distinguish the saffron milkcap (Lactarius deliciosus) from its poisonous cousin Lactarius deterrimus – False Saffron Milkcap , brown roll rims (Paxillus involutus) which look similar and also bleed although tending to be brown, or woolly milk caps (Lactarius torminosus) that are pink or red and have a woolly margin.

2012 Tarkine fungi activities In May 2012, Fungimap, in partnership with the Central North Field Naturalists, will be holding some fungal forays in the Tarkine at Corinna.

“Fungal brew”
From Lost Land of the Tiger ep 3
Brave BBC presenter Steve Backshall travels to Tibet and gets a taste of the famous mountain medicine – cordyceps sinesis, the caterpillar fungus.